Thinking Of Fonts As Software Makes Managing Them Easier

There’s nothing like finding a new and exciting font for your creative project. The font you choose not only gives your brand a personality and enhances the message a brand is sharing with its consumers, but it helps relay information effectively and clearly.

But have you ever wondered what’s underneath the artistry? What is it that makes a font work?

This might surprise some of you, but fonts are, in fact, a type of software. That’s right: Underneath the Italian Renaissance-influenced curves of Book Antigua or the classic-meets-contemporary forms of Futura are many of the same components of any other computer program.

One of the most important aspects of a font is its license. Because like software, you can’t install or use a font without abiding by certain user requirements (known as end-user license agreements, or EULAs). Understanding these licenses can help you better manage your fonts moving forward, both as an individual contributor and as a company.

What Is A Font?

A font is a program that tells a printer or a program how to display a set of unique characters which include numbers, symbols, alphabets (lower and uppercase), and punctuation marks. The symbols themselves are known as the typeface, whereas the font is the software that communicates which typeface a computer or a printer should display. For example, Helvetica is a typeface, but Helvetica Bold is the font.

Like Software, You Acquire The Rights To Use Fonts

Acquiring a font is like paying for a subscription to Microsoft 365 or Adobe’s Creative Suite. You’re paying for the rights to use these programs, not for the makeup of the programs themselves.

When you acquire a font, you’re not getting the actual typeface. You’re getting access to a tiny computer program that produces a typeface in different formats.

Just because you have a piece of software doesn’t mean you get to use it however you want. And it’s the same with fonts. When you acquire a font from a foundry, a font reseller, or use a font through an application, you’re asked to agree to a contract between you and the owner of the font program—a font license. The conditions for use of the font are spelled out in an end user licensing agreement, or an EULA.

Every font comes with a license. All of them. Yes, even the free ones. And every foundry or creative application with a font library may have a slightly different license. Just like a piece of software, the font license details how a font may be used, how many people may use it, and if you can distribute the font either amongst your employees, between you and your client, or between your company and the printer.

Here are a few of the most common types of violations of font licenses. 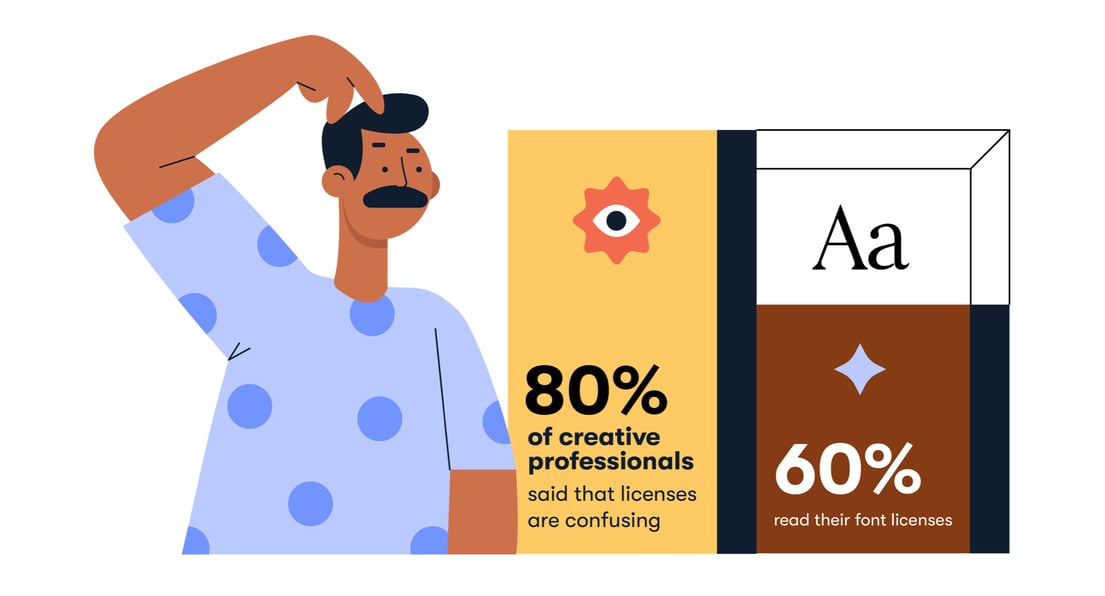 Using A Font Beyond Its Limits

Foundries and other font developers design fonts for different purposes. The most general terms of agreement allow for a particular number of systems to install and use the font. In addition, there are specific digital and desktop rights like embedding a font in an application or document, or for use in specific circumstances. Some fonts are specifically designed for print, while some have been adapted for web use. But just because a font is adapted for web use doesn’t mean you can use it inside of a phone app. Using fonts for projects they weren’t designed for—like a print font for a web design—can cause a real mess in your workflow. You may find that you’re unable to make the font fit properly or play nicely with the program you’re using.

Font licenses all include a certain number of seats, or the number of people that can install and/or share a font. This is a particularly difficult problem to solve and can cause a real tangle within a company or between a company and a client. If, for example, a font requires both the agency and the client to hold a license but only the agency does, a foundry or font provider can take legal action against your client. And the problem doesn’t always come from the company—designers often have a cash of fonts that they like to use and bring with them from job to job. In that same Extensis survey, 50% of creative professionals said they bring their personal fonts to work with them, and 80% said they don’t read the font license before sharing their fonts. 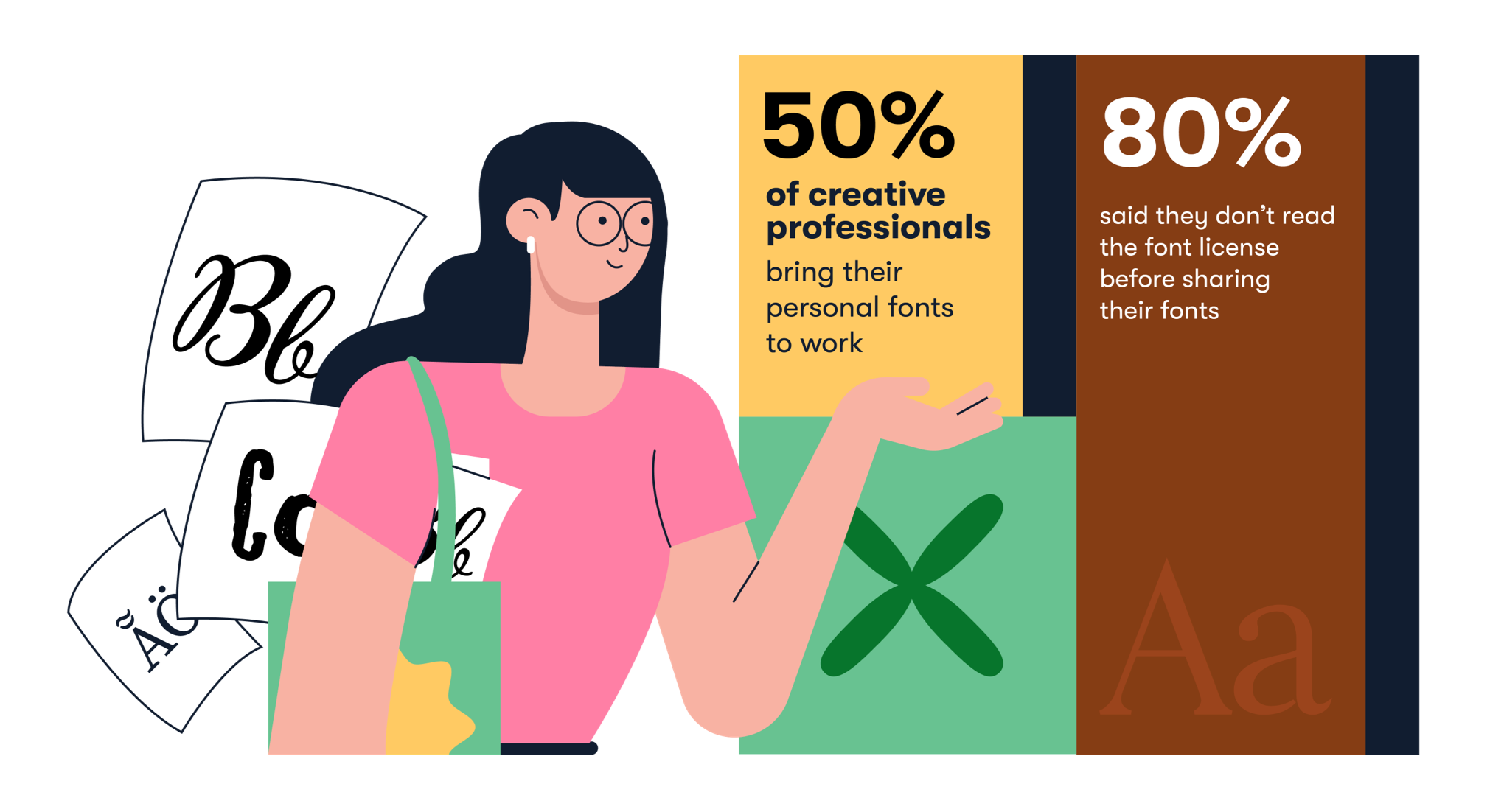 Fonts, like other software programs, are regularly updated by their developers to fix bugs, to adapt to new uses, or to make them more efficient and refined. So while you may have a license to use Font Version 1, you may not have the license for Font Version 4.

It’s a similar situation with unsupported fonts. You may still have the font in your library, but it may no longer be supported by the creative applications you use, causing issues if the program tries to replace a font without your knowledge and wrecking your design. This happened in Photoshop back in 2021—after Adobe rolled out the update, any PostScript font in Photoshop was marked as “missing.” Now with Adobe’s announcement to end support for all PostScript Type 1 in January 2023, it could impact thousands of documents and projects because the font will no longer work.

It’s commonly accepted that you can’t “hack” into a piece of software and change how it functions or performs, whether for your own personal use or to then “resell” (hello, piracy). Fonts are the same way. Which is why converting a font either to a different font type (from PostScript to OpenType, for example) or between uses (from print to web, for example) is not recommended. No matter how “legit” a conversion software seems, it cannot perfectly transform a PostScript font into an OpenType font, or a print-only font into a web font. More likely than not, converting a font is only going to leave minute errors that damage the integrity of the font, causing it to behave differently and wreak havoc on your designs. And the truth is, converting fonts often violates licensing agreements, putting you in danger of legal ramifications that can get very, very expensive and damage your company’s credibility.

As with other pieces of software, it’s a good idea to have a clear process in place to review new font licenses and audit old ones to keep your company and your clients in the clear. It’s also valuable to implement an action plan to handle fonts that are no longer supported, like Adobe’s PostScript Type 1 fonts.

One of the best tools you can have in your arsenal is a font management system, which can help you keep track of all your company’s fonts and their licenses, so you know exactly where the fonts are being used and can review a license at any time. Some font management systems, like Extensis, also include features that can quickly match the best replacement font to save you time and keep your workflow moving.

While juggling several different font licenses can be difficult, there are ways to keep track of all the nuances and let your creativity do the work, knowing that you’re using a font in the right way.

We’re here to help you calm your creative chaos. Reach out to an advisor to get your fonts in order.