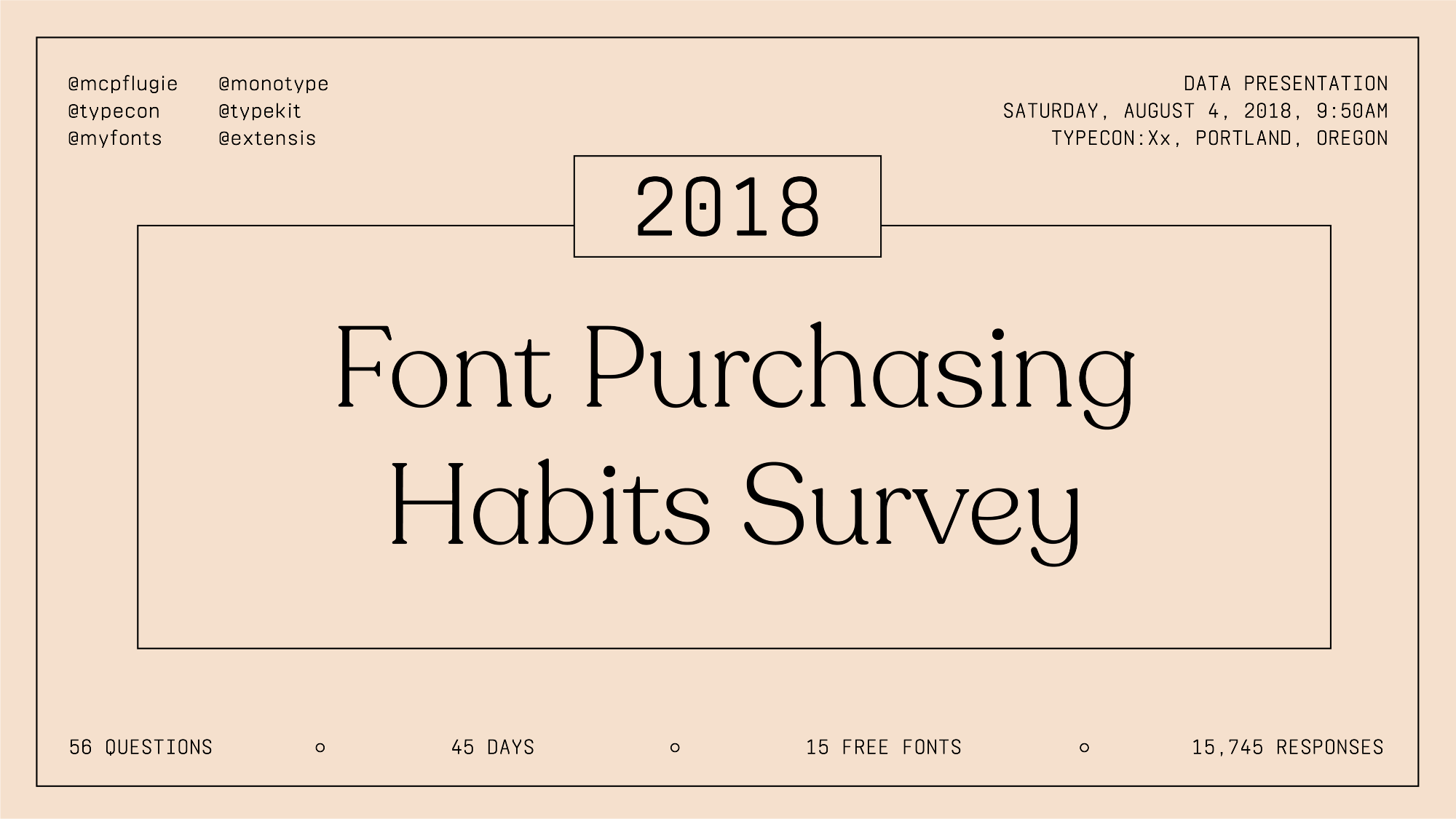 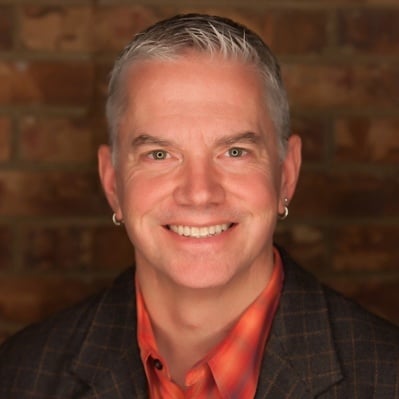 Extensis was excited to be a sponsor of Monotype’s 2018 Font Purchasing Habits Survey, which examined trends in font preferences and purchasing habits. Earlier this year, the author of this survey, Mary Catherine Pflug of MyFonts (a font foundry of Monotype) stopped by the Extensis Portland office to share the results. This survey gathered 15,745 responses from creative professionals all over the world. Thanks so much to our customers that participated!

While Mary Catherine was here, we asked her some questions about the survey, the results, and other interesting findings. This is part 1 of 2 blogs detailing her customer insights from the survey.

1. Congratulations on the 2018 survey results and the astronomical response rate! To kick things off, what one survey result surprised you the most?

Thank you! Seeing the survey grow to 15,745 responses (506% growth from last year!) has been pretty wild. Fonts are such a niche topic, so the number of people willing to contribute to and interested in results of research about fonts has been great to see. I am most surprised about what we discovered regarding foundry loyalty.

For the past few years, I asked survey-takers to respond on a scale of “agree” to “disagree” to the following statement: “There are a few foundries that are my go-to for fonts. I check their fonts first to see if they have what I need before browsing.” In general, responses to this have always been positive, with the average falling on “somewhat agree.” However, this year I included a follow-up question to those who responded “agree” or “somewhat agree”, asking them to name some of their go-to foundries. Instead of naming foundries (the term used for the designers or businesses actually making the type), most people named websites that sell fonts instead. I am really glad I asked this follow-up question, because it clarifies the results of the initial question, revealing that there isn’t actually foundry loyalty, but rather brand loyalty.

The responses also shine some light on an assumption: customers probably don’t fully understand the term “foundry” to mean the type designer(s) who make the font, but rather see it as a catch all for anyone selling fonts. This shouldn’t be a surprise - foundry is a very specific industry term after all - but it still surprised me! It is worth revisiting our use of this term and evaluate if there is something more customer-friendly that we can use.

2. Only 46% of respondents of this year’s survey are from the US. Did you find purchasing behaviors, attitudes and opinions significantly differ from any of the other 118 countries included in this data?

Absolutely! There were responses from 119 countries, but most responses came from the seven countries outlined in the graph below. 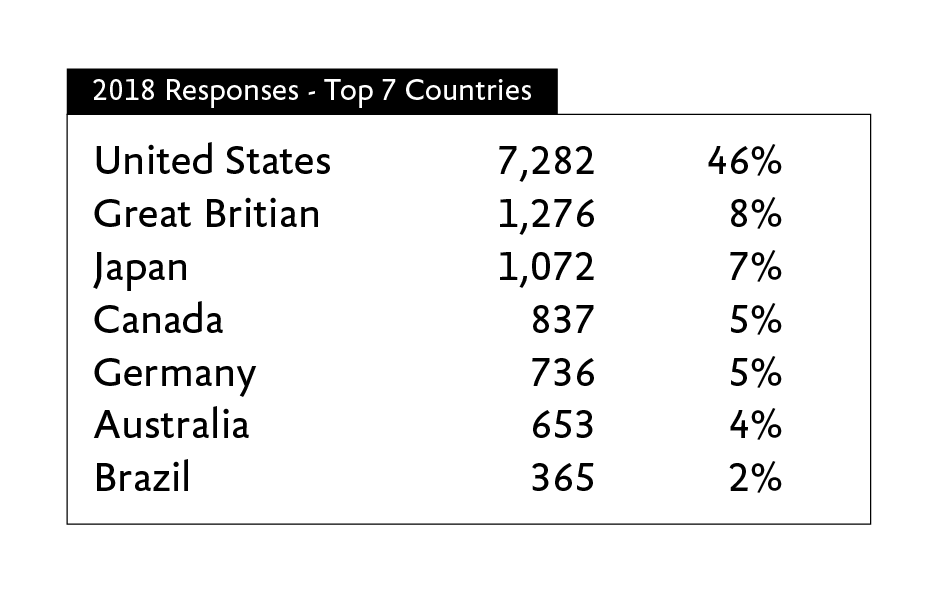 Here are some unique results for each country’s responses:

3. Your results indicate that 51% of respondents agree or somewhat agree that font licensing is confusing and that keeping track of font files and licenses is a major pain point in their work. Did you see any meaningful differences among any specific groups of respondents?

There were some interesting findings, mostly related to font subscriptions and the vendors people use to buy fonts!

I asked the question: “Please select all of the suppliers you have used to pay for or download fonts in the past 12 months.” Respondents could pick as many font suppliers from a list as they wanted. The chart below shows the mean responses to these questions, on a scale of 1 to 5, with 1 being disagree, 3 being neutral, and 5 being agree. Here is an example of how to interpret this chart: For the statement “Font licensing is confusing”, people who do not shop at MyFonts have a score of 3.56 compared to those who do shop at MyFonts, with a score of 3.40. This means that people who do not shop at MyFonts agree that font licensing is confusing more than those people who do shop at MyFonts.

4. There seems to be a distinct lack of awareness for variable fonts—which is distinctly different for Type Designers, specifically. What takeaways do you glean from this result?

When it comes to the perception of variable fonts, the differences between type designers and the design community is huge. Even more meaningful is that this statistically significant difference between the groups hasn’t changed since last year. To me, this means that there is much more work to do to make variable fonts a viable product category.

The huge differences between type designers and the rest of the population is also more evidence to support the idea that the type industry is in a bubble separate from its customers, which was the conclusion I came to at my TypeCon talk last year using the 2017 survey results. Variable fonts could be a huge opportunity. The type community must understand that the rest of the population isn’t necessarily seeing what they are seeing, and make plans to educate font users about variable fonts with this in mind.

The demographics of this small group are very reflective of the general population; there were no glaring differences. Same percentage were type designers (only 8-9%), roughly same distribution in age, gender, and ethnicity, roughly same breakdown of industry (mostly Graphic Design). This group also had a very similar profile in how they evaluate fonts and the features they look for in fonts. Also, there was the same breakdown between professional vs. casual users and skill levels reported. The big differences occurred in how this group responded to the opinions statements. Here are some of the most extreme differences.

People who disagree that fonts can be sexy also reported that they:

Ultimately, it sounds like those who didn't agree that 'fonts are sexy' are those designers who haven't yet surpassed Gladwell's 10,000 Hour Rule, such that they have less experience and confidence in their abilities with typography.

Come back next week for part 2 of the interview with Mary Catherine Pflug of MyFonts by Monotype for more designer insights, and what actions they portend. 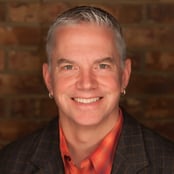 Darrin Helsel has been working in market research, in service to the technology industry, for over 15 years. As Sr. Customer Insights Manager for Extensis, his mission is to leverage his expertise to collect and channel customer insights in support of customers getting more from their digital assets, fonts and images. When he's not asking questions or analyzing data, he and his family are exploring all that the great Pacific Northwest has to offer, either on bicycle or motorcycle. And during the wet months, as a self-reported comics geek, you may find him home reading or in the movie theater consuming the latest installment of the Marvel Cinematic Universe.

Previous Story
← Smart Keywords Allows you to Work Smarter, Not Harder
Next Story
Extensis Portfolio Recognized Again as DAM Leader on G2 Crowd for Second Half of 2018 →